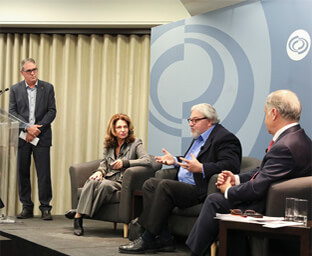 More than 160 people attended the PRWB benefit cocktail to hear about Québec and free trade.

On Wednesday, January 30, 2019, more than 160 people attended the benefit cocktail held in Montréal by Public Relations Without Borders (PRWB). They came to hear eminent speakers talk about North American free trade from a Québec perspective.

Acting as master of ceremonies for the occasion, Dominique Dionne, Chair of the Board of Directors of PRWB, thanked the NGO’s partners and mission heads who have set up more than 40 missions in some 20 countries since its founding in 2007. They had all been invited by PRWB in recognition of their contribution.

Ms. Dionne underscored the exceptional work carried out by her predecessor, Guy Versailles, who was in office for four years, from mid-2014 to mid-2018.

“Guy accomplished an incredible amount of work for PRWB, never counting his hours or efforts, and led the Board of Directors with his usual efficiency. He leaves us with an organization that has been changed for the better, one fully prepared to confidently handle future missions.”

The benefit allowed those in attendance to hear vigorous analyses by invited panelists Raymond Bachand, Chief Negotiator for Québec in the NAFTA renegotiation, Donald Cuccioletta, from the UQAM’s Chaire Raoul-Dandurand, and Raphaël Bouvier-Auclair, Radio-Canada Correspondent in Washington.

The panel was led by Michèle Boisvert, Senior Vice-President, Business Outreach, with the Caisse de dépôt et placement du Québec, who served as host of the event.

See photos of the event